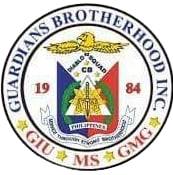 Philippine Guardians Brotherhood Inc is a fraternity with a chapter based in Tagum City, Davao Del Norte. It is registered with SEC through S.E.C. Registration Number A200008885.

The organization was first known as the “Diablo Squad” when it was founded in 1976 by Seargeant Leborio “Abraham” Jangao Jr with other members of the Armed Forces of the Philippines (AFP) when he was a detachment commander in Sitio Kidama, Parang, Maguindanao. It expanded to other areas in Mindanao and unified as an organization through the help of key personalities like former Senator Gregorio “Gringo” Honasan II who served as an interim national chairman of the organization.

The Tagum City chapter was started in August 2001 by Maximo FRMG STAREX Janolino Jr and the unification of all Guardian Brotherhood chapters in Tagum City was initiated through the help of the current PGBI Regional President Paulino “FRMG” Junsay, Jr.

No office or a physical location in Tagum City